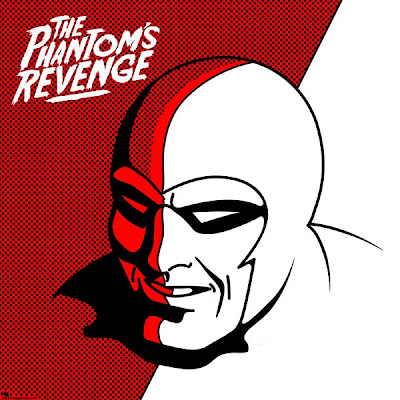 1) Hi Phantom’s Revenge, introduce yourself to our followers.
Ciao, i’m Tony, 27, from South of France, i make music since 3 years now and i eat a lot of pizzas

2) How is life when you are a super hero? We know that once you saved 26 children stuck in a volcano and after this episode Pennsylvania dedicated to you a steel roller coaster at Kennywood park
This is a pretty good job, don’t know who told you about that volcano thing, but it was just a tuesday to me, the rest of my week usually involves making music in underpants, still need to ride that roller coaster though, obviously if you see someone saying “hey i’ve just ridden the phantom’s revenge”, they’re not talking about me

3) Despite you commitment to save the world, you still can find time to play music. The Charlie Ep is really “fucking awesome”, as Mstrkrft said. If this wasn’t an interview, but a commercial, how would you introduce your ep and what would you say to make us buy it?
If it was a commercial, i’ld probably put some patriotic music, a few explosions à la Michael Bay, probably put a few ninjas in there too because ninjas rules, then Jeff Bridges would in the end tell you how much this record could contribute to your happiness because it’s “fucking awesome”, i’ld put also a mediafire link in a subliminal way

4) The only thing we know about your true identity is that you are french, the best visiting card for a dj . According to you, how will the french sound evolve in the near future?
Hard to say, i guess the upcoming albums of surkin, oizo, justice and of course daft punk will tell, because they are the locomotives

5) Right now, what project are you busy with? Are you planning to make a new ep?
I’ve been involve in a lot of remixes lately so now i’m 100% focused on my own stuffs, so yeah, a new ep is what i’m working on, as it seems that it’s definitely too late for me to be a professional football player, i also plan to eat a lot of pizza in the near future

6) If someone made a movie on you, like a tribute to your heroic deeds, who would you like to work on the soundtrack?
A movie about me would probably be a giant joke, so i guess the crazy guy in the street making music with 2 peaces of stick and a few paint buckets would be enough, but if i had the power to chose who i want i’ld probably chose Hans Zimmer

7) We know you are a big fan of Raffaella Carrà. on a scale from 1 to 10, how much would you like to be Guetta now?
As much as i don’t really like the role is playing in the international music scene right now, i’ld say 10, because the guy is always on the road making tons of money and i’m in my bedroom drinking light coke and eating potato chips without wearing any pants, his life at this exact moment seems to be much more exciting

8) When you are not busy with super hero/dj stuff, you follow football. What do you think about Napoli’s run in the Champions league?
I think they’re doing pretty good considering the crazy group they’re in, it will be awesome if they pass the first round, but it will be hard, i think it’s pretty awesome the way the stadium was full even when the club was in serie C

9) A super hero is alway full of things to do, so thank you for your time. Greet the followers in your favourite lenguage (why not doing it in italian, since you’re taking a course?) and suggest us a song
Grazie mille, è un piacere, Com’è bello far l’amore da Trieste in giù