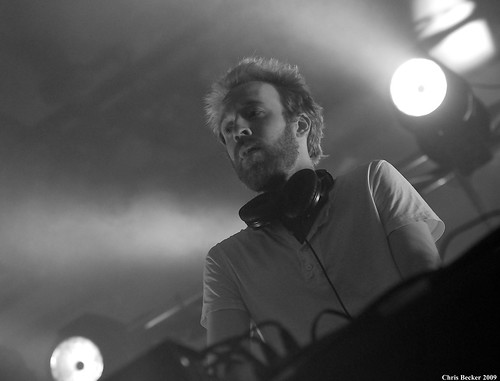 1) Hi Al, introduce yourself to our readers.
Hello readers! My name is Al Doyle and if you’re reading this then you are reading some words which I typed on my computer.

2) You’re one of the members of the english group Hot Chip, but not from the debut. Describe to us the day you decided to join them.
I was unemployed and sitting in my room in Peckham in London. I got a phone call from Alexis Taylor who I’d met a couple of times, and he said do you want to be in my band Hot Chip? I said sure, when can I start? And that was that. Too easy.

3) Your last album One life stand was released in february 2010. Why haven’t you produced new songs since that date? Did you opt to focus on live performances all over the world?
We toured One Life Stand for a year, so I guess that consisted of “focussing on live performance”, then we took a break to do some other things, and then it took about 9 months to write, record and mix the new album. There’s been a 2 year break between every album, so we’re hardly bucking the trend.

4) How would you describe the evolution of the band from the first album Coming on strong – released in 2004 – to the last one, One life stand ?
I think the songwriting, the production and the live performances have all improved from the first album, although I still have a lot of affection for Coming On Strong as I think it has its own charm and intimacy, but we are a different band now, different people. There has been a lot of mileage in the last 8 years, and it’s taken its toll.

5) At the end of 2008, Ready for the floor was nominated for the Grammy Award for the Best Dance Recording, but the song later lost out to Harder, Better, Faster, Stronger by Daft Punk. It was an hard battle. Would you like to comment?
Not really. It was very nice to be nominated.

5) You have played at the most important festival stages all over the world such as Sonar, Melt!, Lollapalooza, Coachella. What’s your best memory of these experiences?
Maybe seeing Prince at Coachella? The rumour was he was paid a million dollars. If that’s true, I’d say he was worth every dime.

6) You are, together with the other members of the band, some of the few appreciated musicians who also also work as djs. What do you think about the huge phenomenon of artists coming from totally different sectors who work for the dancefloor ?
We just try to concentrate on being the most fun and professional DJs we can be, listening to lots of new music and working hard on the decks. It’s something we enjoy, and we’ve done it since the very early days of the band, so we don’t feel like we’re “band” DJs anymore – it’s great to be accepted, but it took a long time!

7) In june i was under the stage to listen to your friend Alexis Taylor opening the big live of the masters Chemical Brothers here in Milan. Where you there with me too ?
If I was I don’t remember. Are you sure it wasn’t Owen, the dark haired dude that looks a bit like Tom Selleck without a mustache?

8) Ok, we have finished, Greet our followers in your favourite language and recommend to us a song you like.
My favourite language is probably Japanese but I can’t speak it, so I’ll have to stick with good old English.
“hello followers, why not try checking out this Philpot remix of Juju and Jordash? Tattoo’s Island (Dub)