1) Hi Karley! How are you? Introduce yourself to our readers
I’m a 26 year old writer and sex blogger. I live in NYC but grew up about an hour north of the city in a suburban town with my lovely parents and little brother. I also lived in London for seven years, which is where I started writing my blog Slutever in 2007. I write about sex, dating, fetish, magical masturbation rituals, my internet slaves, peeing on strangers–stuff like that. I really love writing it, and people seem to like reading it, so it works out well. I also now have a show on Vice.com called Slutever which is based on my blog. I also do a monthly short film series for Purple Magazine.

When I created the blog in 2007 I was living in a squatted, disused hostel in south London with 12 other people, all in our early 20s. It was the sort of house where it wasn’t out of the ordinary to come home to a living room full of naked people on DMT having ritualistic sex, or a homeless Romanian family baking bread in the kitchen. Literally, both of those things happened. So I started writing the blog, intending mainly to create a written record of all the weird and extreme things that went on in the house. At the beginning the only people who read it were the people I lived with. It has grown and evolved a lot over the years, and today I like to think of Slutever as my own personal investigation into sexual behavior.

2) In your blog you write mostly about sex, drugs and other stuffs that most of the people could see a little bit “crazy” (not us, of course). How did you clear the “Omg what my parents will think about me reading that?” hurdle? I mean, I am still hoping that my parents keep thinking “she-is-too-young-to-have-sex” or something like that!
You have to think about it this way: Do you think Andy Warhol or Fassbinder held back from making the art they wanted to make because they were afraid of what their moms would think? Absolutely not! You just have to get over it and realize that you are your own person, and that fear and weakness are not admirable qualities.
I have a sort of “don’t ask, don’t tell” situation going on with my parents about my blog these days. We basically agreed to disagree, in order to prevent arguments. I appreciate that they respect my privacy.

3) After high school you moved to London, where you used to live in squats in other guys, bugs, rats company, and where nobody has not even never thought “ok let’s clean and throw the trash out of here”. Can you tell me how you didn’t catch the hepatitis? Are you a sort of super hero maybe? Seriously, I want to know.
While squatting, my flatmates and I developed a high immunity to germs from eating out of garbage bins. You see, we didn’t have much money back then so we’d get the majority of our food by raiding the bins outside supermarkets at the end of the day. Basically all you have to do to avoid getting sick is to never wash your hands, always eat things off the floor, don’t shower very often, and never wash your clothes. Your immune system gets really tough that way!

4) Did you ever regret this kind of life? Reading your blog it seems that you had (and still having) a lot of fun but I guess it wasn’t always so easy. I mean, when you go to the university, or when you have a secure job, even if all the rest is fucked up, you still have those things. It’s very easy to feel lost, especially when you are 20.
I don’tregret it at all. I met the most incredible people squatting, and had experiences I never would have had if I took the “normal” route of going to college and getting a secure job.

How I got into squatting was: I was studying abroad in London as an exchange student through my uni in America. I loved London instantly, but hated school, so after about 6 months I dropped out of uni but decided to stay in London. At the time I had just become really good friends with the artist Matthew Stone, who at the time was squatting in this gigantic abandoned shopping complex thing in south London with a group of about ten people. The building was insane—it had a gym, a church, and a nightclub in it. I would go over to visit and be totally overwhelmed. Their living room was the gym and they had made makeshift furniture out of the old exercise equipment. One girl turned the girls locker room into her bedroom. The way they lived was so weird and exciting to me. So when I dropped out of university in 2005 I didn’t have much money and couldn’t afford to pay rent, so Matthew offered me a place in their house. They had moved to a new squat by then—an abandoned lift factory, also in South London. It was 3 floors and there were about 10 people living there including me. My bedroom was the factory stairwell platform. How many people can say they lived on a stairwell platform? Surely that experience is far more valuable than a college education.

5) You met a lot of people with let’s say particular sexual preferences. The guy who liked to be your slave and buy you stuff and pay your rent (The famous Book bitch), then the one who liked to drink your pee, etc. Has there ever been someone who really scared you a lot? Like “Omg what the fuck am I doing here?! He will kill me for sure”!
No, I haven’t actually. I’m pretty cautious about meeting with new clients, and I do sessions at a BDSM dungeon so it feels safe because there is security there. So as long as you’re smart about it, you can avoid feeling scared or unsafe. 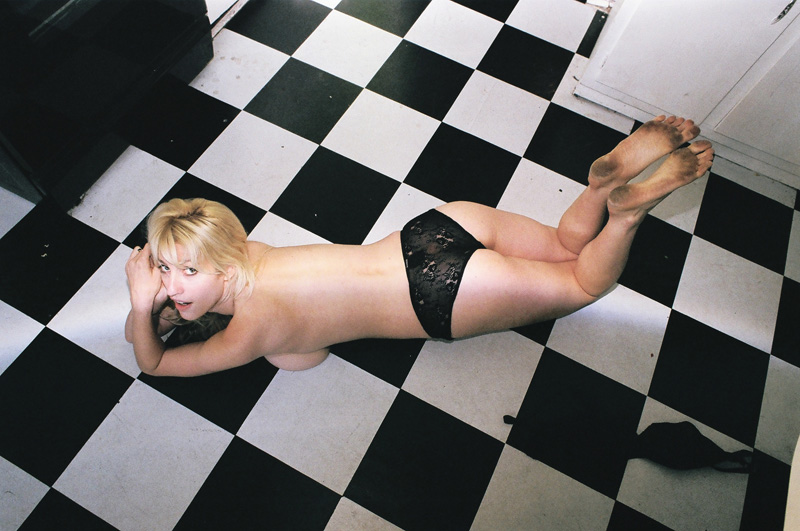 7) Let’s keep pretending to be deep girls for a moments, philosophizing like if we were wearing eyeglasses. What is the meaning that you give to the words intimacy and decency?
For me personally, a big part of intimacy in a relationship is knowing that the person you’re with makes you into a better version of yourself, and vice-versa. That’s why I always want to date people who are really smart, interesting, successful, motivated and funny. Because that shit rubs off! What could be hotter than inspiring each other?

8) Are you a jealous girlfriend? And do you think it’s possible being together for years without the need to cheat on the other person? Sometimes, when I stop believing for a moment in unicorns and true love I just think that people stay faithful only out of guilt.
I wish I could erase any jealous tenancies that I have, because I think jealousy is a horrible quality, but like most people I am not immune to feeling jealous on occasion.

I think everyone is different and some people are more naturally monogamous than others. Only sleeping with one person for a long period of time can be difficult, but sometimes the sacrifices you make by not fucking a random idiot in a bar on a horny impulse can make your relationship with the person you actually care about a lot stronger. At the moment I have a long-term boyfriend and I don’t feel the need to fuck anyone else. Although he’s the most beautiful person I’ve ever seen–sooo fucking skinny that I can basically see through him, and a gigantic nose, which I love–so it makes it a lot easier!

9) I usually interview djs, or musicians, and I like to ask them if there is someone they would like to work with. In this case I will change my question: Is there someone that you would like to have sex with?
Louis Garrel, AKA the most perfect man on earth.

10) And now, some short questions for our girls readers:
– Are dimensions really important? (I don’t know what you mean by this…?)
– Is sex on a first date ok? Definitely. How do you know if you really like someone if you don’t know what they’re like in bed?
– What should i do with: douche bf, great sex? Perfect bf, awful sex? Neither! Gross! You should never have to make that choice.

11) Thank you very much Karley, it was funny! We love you (and you boobs also) Leave us with your favourite song.
“Bad Girls” by Blood Orange. Sexiest song ever!