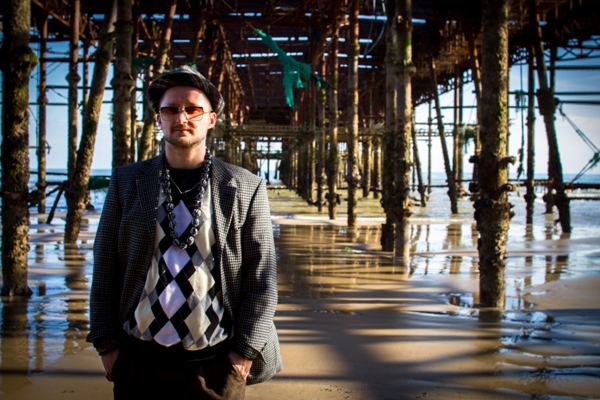 -Your new album shows a sort of departure from your usual style, which in your former “U Can´t Lurn Imaginashun” was still firmly rooted in the tradition of Soul, Reggae and Hip-Hop, to embrace without any fear more electronic/digital sounds and contemporary rhythms? How much this new direction is informed by your globetrotting DJ career?

When i made the album I made so many songs that the album could of gone in many directions… I have a whole bunch if Reggae stuff that will come out later but this album was a collection songs that felt right together. And yes of course I’m influenced by what is around me. Current trends. Not that I copy but you can’t help be partially swayed.

-The title “Don´t Be Scared” seems to emphatize your decision to move forward. Is this the right interpretation?

I guess the quick answer is yes. All of my titles have multiple meanings depending on what you want to get from the music…

– You come from an analog world of music-making. Can you tell us if there is any (and which) difference in the methods and the equipment you used for this album compared to your older productions?

Well of course production techniques arer dependant on technology. When I first started in 92, I had a sampler and computer. Nowadays an iPhone has more power than that put together. However the tech difference between this and, say, my last album isn’t that great. I sold some keyboards, got done new ones like Moog Voyager Juno Oberheim analogue stuff. Also I started using a soft sampler which I have never used since stopping with Akai. That had changed things cos now I can take like a vocal loop or 808 and play it up and down the keyboard. Basically trick trax out which I wasn’t able to do before

-In a track like “Lemon Haze” I can still hear the DJ Vadim in Ninja Tune style. Was it a nod to those days (and your older fans) from you?

-What excites you of the contemporary music scene and what do you absolutelly miss of the mid 90s, when you founded your own label Jazz Fudge?

There is loads of stuff that I love now, mostly from UK, like the UK  bass music scene and Reggae. However it’s hard to say how it will stand the test of time, because that is what music needs to really assess it properly. It’ s easy to fall in love with a new song, that doesn’t mean you will like it in a month or a year. See, you need to give music time to breathe. Too many people nowadays are over-nostalgic for the 90s. I lived through those days and they were great  but we are in 2012 and I look forward to the future. I have to believe things can get better.

-Can you tell us something about the vocalists you worked with for this album? Some, like Yarah Bravo, are well known old partners in crime of yours.

I miss album I worked at, some people don’t,  like Yarah Bravo, Pugs Adams, Heidi Vogel and a lot of vocalists that I have never worked before as well. Jazz Bailey, he is an incredible jazz vocalist. J Man an incredible grime, Karen b- Pirate of the Pacific. Greg Blackman another incredible incredible UK soul singer

-Is there any chance for you to reactivate some of your older musical projects, One Self in particular?

Of course I’d love to do One Self again, does not depend on me but on Yarah and Blurum speaking again

-You´ve been always quite busy remixing other artists. What is in your opinion the secret of a really good remix?

Remixing is really hard thing to do because you have to add something that will give something to a song that it doesn’t have, take it into a new direction, up-tempo, I Downtempo all, this way or that way.  My favourite remix I did I guess was “Superstition” by Stevie Wonder, Alice Russell  “Hunger” or “Fever” by Data MC.

Well for the rest of this year I’ m touring and promoting the new album “Don’t Be Scared”.  I’ m also editing and filming music videos. I have also completed another two albums. DJ around the world. Maybe open a restaurant!
Share This
13 Ottobre 2012