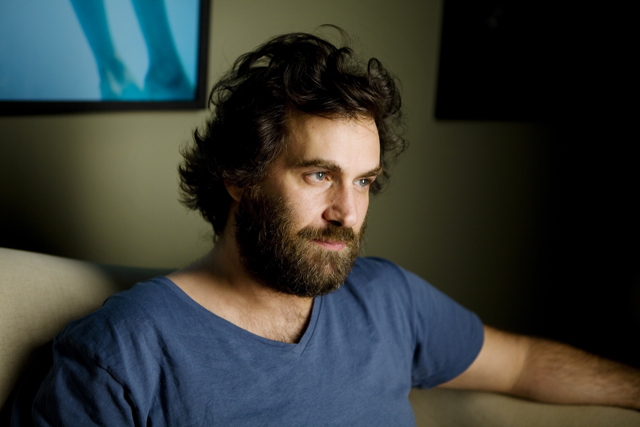 1) Hi Guillaume! Introduce yourself to our readers (even tho we’re pretty sure they already know you very well)
Hello guys ! I m Guillaume aka The Supermen Lovers.
Born at the end of the 70’s, I grew up with 80s funk and started producing & composing music in the 90’s. I started music as a kid, playing as a keyboard player (clavinet/rhodes etc…) in many funk & acid jazz bands. Then I started listening to my first electronic records: Larry Heard, Derrick Carter, Gemini etc…all guys from Chicago & Detroit. Finally I saw some live acts from Chemical brothers, Daft punk, Basement jaxx…that was 1996. I decided to start producing electronic music because of those guys…

2) In the late 90s you create your own label and you started making house music under the name “Stan De Marevil”. How have those years been and why did you decide to change your name in The Supermen Lovers?
My first record has been released in 1998 under the name “School”, on UK label “Cyclo records”. You can even found a great remix of Larry Heard on this record. :)
I formed School with my friend Stefan Bejean; nonetheless, I wanted to do something more close to the french sound that began to grow at that moment. So I built my own label “Lafessé Records” and started producing under the name “Stan de Mareuil”. Stan de Mareuil was a kind of ghost in fact. ;) In his Bio I introduced Stan as an aristoctrat from Geneve (Switzerland) who was living in a castle, spending his time to organized greyhound races.
After 5 records on my label under the name “Stan de Mareuil”, I decided to start a new project, funkier and a little closer to the sound I used to listen to in the 80’s.
As I was listening a lot to Johnny Guitar Watson, especially the song “Superman Lover”, I decided to take the name “The Supermen Lovers” for my new project. I released my first EP under this name with “Marathon man” and “Cash” and 2 or 3 months later I released “Starlight”.

3) Starlight (2001) was a big hit. It was played on every radio, club, Mtv, etc. How did you manage all that success?
When you do such a hit, you learn that it doesn’t belong to you anymore…but to the people. So it is a little hard to see your music becoming huge as you feel like if it’s someone else who did that track…disturbing…after you have accepted that it’s only good times :)))
And what do you feel about this song after more than 10 years?
Nowadays I m really proud of this track. It’s part of my life and my musical evolution. I’m surprised to see that Starlight has become a classic :) and it s always great to play it live !

4) When everyone was dancing your song, have you ever been afraid of staying “the guy who made Starlight” forever? The James Van Der Breek of the music.
No. Starlight was something spontaneous. I didn’t try to make a hit…it became a hit… I’ve never tried to do a second “Starlight”. Music has to be honest and that’s why I’ve released tracks like “rebirth” or “eagle shadow” right after it. There are no rules in this business: you have to make the music you love and that’s all.
Who the hell is James Van Der Breek? A coffee-shop owner in Amsterdam?

5) “Between The Ages” is your third album and you collaborated with Ricky Bailey from Delegation and Norman Jean Wright from Chic to make it. How did you convince them to be part of your album? They are two legends, at this point Daft Punk (they are working with Moroder and Nile Rodgers) have nothing you should be jealous about!
In fact I met Rick Bailey during a gig I did in 2008. He came to see me after the show and told me that he would have liked collaborating with me on a track. And…for sure! We did a track together. I made him heard “Take a chance” and then we went to the studio to record the track. And guess what? He did the vocal on one take! Never seen that before! Such a great singer !
For Norma Jean Wright, that was different. In 2008 one of my friends made a track with her. I did a remix of the track. A few weeks after I recieved a mail from Norma…the singer of Chic…I think that’s the best mail I ever recieved !!!! She told me : I love your remix, send me a track and I’ll sing on it….I sent her 2 tracks (Keep the funk alive & Electronic Whispers).
Working with such legends was incredible because they were so cool & professional. They understand exactly what you want and even if they are “Delegation” & “Chic” they accept going into your musical world…. a dream came true :)))

6) “We Got That Booty” is your new single.
We’d like to comment some lyrics of it with you, like “Booty makes the world go round… Booty has no limits”. What do you mean by that? (let’s pretend i’m in front of you wearing glasses with a serious face)
Ok (Let’s pretend I m wearing a Darth Vader helmet with a hilarious face).
I wrote the lyrics with the singer, “AntOnin”. We were looking for something to talk about….after long months of thinking we finally decided to go back to the essential, to the roots of all human beings: sex….

7) You also collaborated with our neapolitan friends, Herr Styler. Where did you guys meet? We’re very proud of them!
Herr Styler ! They brought their italian touch on 2 tracks on my new album! The first collaboration was on “Say no more”. In 2009, I was trying to find a more pumpin bass on the track but I couldn’t find anything…you know, when you work again and again on a track, there’s a moment where you are not able to do anything more on the track even if something is missing…my agent told me he was in contact with 2 guys from Naples who could help me. I send them the track and they sent it back to me with a great bassline! Then they came to Paris, we became friends, and when I had this track with this “All right, OK, Oh oui, C’est bon” chorus…I needed another great bassline from Herr Styler, and they did it again!! :))) (Plus a a massive remix on “Take a chance”!)

8) You are french, and everyone knows french are the best at making music since Homework by Daft Punk, let’s admit it. Who is your favourite musician/producer/dj right now? The one you would bet all the money you earned with Starlight on.
At the moment I’m listening to producers like “Tiger & Woods” & “Oliver”. I don’t know if I would bet all the money I earned with Starlight on those guys but I really like their sound.

9) Now tell us something about your plans for the future.
With the label we are working on the new single “We got That Booty” right now. The video clip just arrived ! I’m also finishing remixing “Lo Stato Sociale” and “Natty Fensie”. I just did a remix for my friend Spiller, which has been released last week :) I’m also doing a lot of gigs at the moment. It’s some kind of live organic-electronic funk. :) I mean lots of keyboards, guitars and sequences.
The next gig is on the February 8th in Paris with Kavinsky, Jupiter, Fake Blood & Baadman. Then there’s Moscow, Belgium, and lots of gigs in France.
And I’ve started working on a new album…