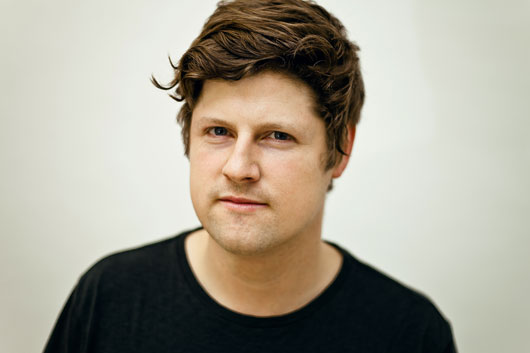 How did you get from your native Greystones, near Dublin, to Berlin? How’s living there at the moment?
I moved here around six years ago to pursue my dream of making music and djing. It has been a great experience and I still love the city after all this time.

Are there any specific events or themes that have influenced the writing of your debut album?
I think it’s an album about growing up and about my journey in music and as a person over the last few years. It is also more generally about change, the passing of time and how temporary everything is.

I asked that because I think to recognise a sort of narrative path from the beginning to the end of the album. Starting from the album´s title “Changing Days”. The first two tracks seem to come out from a dark place of the soul. I´m thinking about the lyrics of “Cannibalize” for example, and the second track “Everything You´ve Done Before” it s almost bluesy.
I don’t think those songs came from a dark place to be honest. I think of them more as quite atmospheric but I definitely don’t think of it as dark … Of course the listener should take from it what they want. If the music means different things to different people then that’s a good thing.

From the third -title- track on you seem to start an uplifting  journey that ends with the feeling of total freedom of “The Sea Inside”. You incorporate world music´s element and the tracks are more dance-floor oriented. Was it a conscious process to compose and produce the music accordingly?
It wasn’t really a conscious effort to do it that way, I never really thought of it in that way. The record just came together quite naturally, also in terms of the sequencing.

Your vocals sound untrained, naked and very vulnerable and enhance the emotional impact of your music. Like in “Please” for example. You don´t seem to be scared of showing that side of yours.
Yeah, I just wanted to make a personal, and I guess, honest record. From the start vocals were a main ingredient of this process. I’ve always liked vocals that are imperfect, I think it makes it somehow more transparent and brings you closer to the listener.

Your sound is very organic and gives the impression of great warmth and humanity. Which are the parts of your equipment you couldn’t live without?
My computer running Ableton Live is obviously the thing that was most used on the record, also, the Arturia Mini Moog was used all over the record. I just bought the real thing but I am sure the Vst will still be indispensable.

Can you tell us something about your label Maeve?
It’s just still at the very beginning. The Drifter and I set it up with Baikal and the first record was from him. We will have another one out soon so keep your eyes peeled!

What about your monthly club night Passion Beat with The Drifter?
It’s a party we’ve been doing for three years, first at Klein Reise and now at Loftus Hall in Berlin. The concept was simple since the start, it was usually one guest and The Drifter and I. Past guests include Nicolas Jaar, John Talabot, Ame, Ripperton etc. At the moment The Drifter is more involved and my schedule means I can’t be there every month. Our next party is our three year birthday on March 8th with myself and The Drifter all night long.

Do you have more remixes in the pipeline for the first part of the 2013 or will you focus more on “Changing Days” promotion?
Yes there will be a couple of remixes coming up, I can’t really say much more but keep a look out.