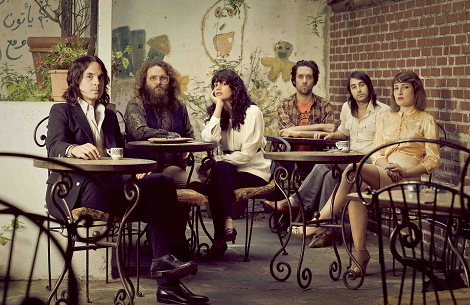 -The Phenomenal Handclap Band can surely being called a collective more than a pure and simple band. Are there different constellations that you adopt when it comes to record or play live?
Aside from the number of guests on our first record and the size of our touring band, we aren’t much different from a “pure and simple band”, as you put it. We did make the record first with no real intention of performing it, but once it started to get attention, we figured out how to adapt the sound of our record for our live show and we were able to play live shows and tour.

-How important for P.H.B. is being based in New York City? Can you imagine your band being born somewhere else than there?
I think for us, at the time that we made the first record, being in N.Y. was definitely a big part of the process, to the point that the city was an unspoken member of the band. All of the people involved with the record were people that I had met and/or became friends with in New York.

-Your new remixes collection “PHB Loves NYC”, as the title says, it´s a New York thing too. Can you tell us about it?
Our second record “Form and Control” was a sort of departure from our previous creative process. It was less informed by our experiences in New York because by that time we were touring a lot, spending more time abroad. With this new release, we’re getting back to our roots and paying respects to our colleagues in nightlife around our city.

-I always thought that you found in Tim “Love” Lee and his label Tummy Touch a sort of ideal soulmate. How did start collaborating and how´s your relationship with him?
I bought one of Tim’s records years ago in San Francisco without knowing who he was. A few years later, I was looking to buy a Wurlitzer on Craig’s List and someone named Tim Lee was selling a few for pretty cheap. For some reason, I thought to ask if he was Tim “Love” Lee, and he replied that he was, so we struck up a conversation. He later did a remix for an early production of ours that made it onto The Sopranos, and the rest is history.

-You recently toured around Europe. How was it for you? Do you enjoy touring?
Touring in general can be a lot of fun, but it doesn’t leave a lot of time for anything else, and as a producer, I began to feel restless because I didn’t feel like I was ever home and around my studio long enough to get any work done. The past few months I’ve been able to concentrate on production, writing, and actually playing, which is great.

-What’s in the P.H.B. pipeline for the rest of 2013 and over?
We have a few remixes that are about to come out of Linda Mirada and Wild Rumpus, and this summer I’m going to do a DJ tour of Scandinavia and Northern Europe, mostly Sweden and Germany. I’ll be back in N.Y. in late August to finish up some productions I’ve been working on.