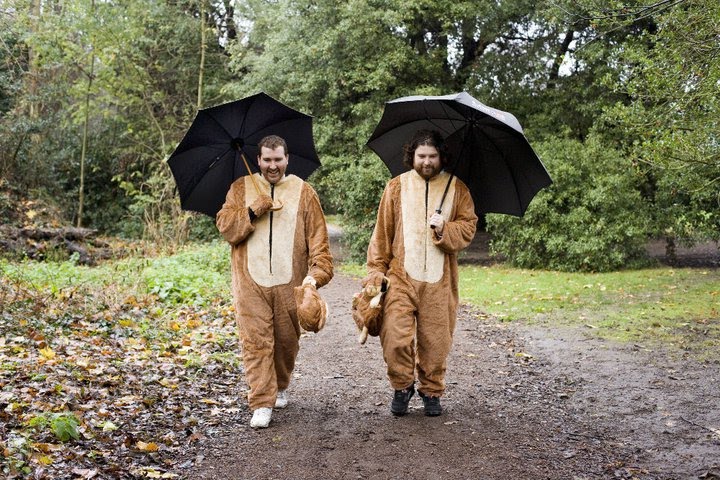 Ok guys, maybe it’s obvious, but i think that eveyone wants to know why you chose this name and if you considered some alternative to this option.
Raf: Oh darling, just take a look at me, you can understand why! The conception was initially mine, but after our friends used to gave it to us.
Joe: During all my life people are saying i look like a bear, from university. And we are not so tenderly, we are just so hairy! (ride)

At the beginning the group had to be formed by three members, you two and Joe Mount from Metronomy. What happened later?
Joe: He was busy, we asked him, but he had to manage big records with Metronomy. But I think that one day we could become three because he’s a so lovely man!
Raf: You know, with Mount the situation was a little bit different. Joe and me were friends before, with Mount we were just friends of friends. He supported us, but he had the project with Metronomy so it was very difficult to keep things together.

Are you planning to expand the band in the future or not?
Raf: Oh why not, but maybe to be two forever will be economically sensible! (ride)
Joe: We will expand, yeah, we think it could work.

Did you meet each other the first time during the Greco-Roman Soundsystem parties or were you already friends before?
Joe: Originally i was introduced to Raf by Alexis from Greco-Roman, that’s why i heard about a dj called Raf Rundell, they were friends. The first thing that he said me was ”you have to call him Raf Daddy or Raf Diddy” (like Puff Diddy) – oh, i need to meet this guy, i thought!
Raf: We were in the same scene where eveybody knows everybody, we have a lot of mutual friends, i knew the Hot Chip and the guys from Moshi Moshi where the Hot Chip released their first album. One day or another we had to meet!

Your last album Be Strong had a huge success because it’s a blend of house, electro, pop melodies, but you also released some EPs before. What was the process that led you to create the album, did you collect all the tracks before or it was a step by step creation?
Joe: Both, we made a series of EPs in vinyl and we collected what we found to be the best tracks to create an album, it was a very long period of creation. It was absolutely a spontaneous project, everything started so slowly, we didn’t know if this could work or not.
Raf: When we started, we had no conception to make an album,  it was just an experiment. We didn’t expect to produce this release also if all our friends were saying ”oh you should do it”.  I had a label, we wanted just to see if something good enough came out, after other friends keep in touch to release it. They asked if we wanted to be the artists, to be invloved, they incouraged us to make it.

Are you planning new projects/productions/collaborations?
Raf: We are working on a new album at the moment, we’d like to release it in the next spring, we were recently in South Africa to play a couple of gig with some local musicians that will be featured on the album.

So which influences will we find on your next work?
Raf: We’re still in love with House and Dance music, last time we have been influenced by Country, Soul, Reggae. I think this might be a little bit more focused.

Do you follow the young projects such as AlunaGeorge or Disclosure?
Raf: Of course, i mean these artists are making records from the same places as we are, for us it’s so ordinary. In this moment, there are some relevant things in the UK, there’s a young vibrant scene. I like to get in touch with these new fresh hits.

I have recently been in Croatia to attend the Unknown Festival where the headliner were the Disclosure. The thing that impressed me was the engagement of the public with the tracks, the lyrics, the artists: they knew every song by heart while in Italy they’re still considered an underground act.
Joe: Yeah, i think that’s a cultural thing, story teaches us that youths in UK discover things quickly, before the others. I don’t know why this phenomenon exists in England!

You were hosting a radio program for the Ministry of Sound. Is it still on air?
Raf: We’re on Rinse FM now. Before we were on Ministry of Sound, now we have a monthly program on Rinse. It’s not a classic radio program, we don’t talk about any topic, we just play music. Rinse is more like a party station with good productions venues, the emphasys is on putting anderground music, good dj mixing records.
Joe: We just pick our favourite new things and try to play exclusive tracks, kind of very recent productions or records we love.

Which are your sources to discover new music? Do you follow blogs or social networks?
Joe: It’s a big mix of everything. We are in the music business from a lot of time so we have people who suggest us what’s good, but meanwhile we go online on blogs and websites to try to pick up on things tht are going on. Also going to the records shops can be a very good resource cause you find things you can’t find anywhere else.
Raf: It’s very nebulous, from everywhere, it’s a word of mouth!