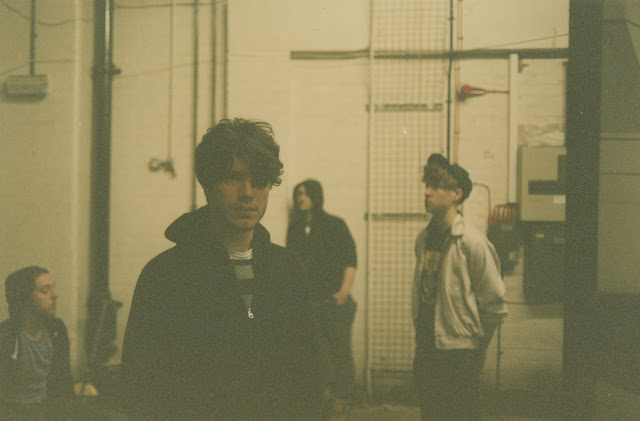 
1) Hello there, please introduce yourself to our readers.
My name is Roman and I play in a band called Breton

2) How did the name come up?
We are really into taking things apart to see how they work.
Everything from videos, songs and even synths.
André Breton is a writer who published the Surrealist Manifesto, and a lot of the ideas that the movement spoke about seemed to really strike a chord in us. They deconstructed everything around them to try and find some new answers.

3) You have recently supported Tom Vek on his sold out comeback UK tour and now you are on tour with Ghostpoet. Tell us something about this experience.
We have been very lucky to be asked on tour with both these musicians. Tom Vek is a very inspirational artist, and we had recorded with him in the past. I had never seen him play before the first night of the tour, only spent time in the studio with him, so it was amazing to see the live-show come to life. There is something slick about everything he does, and the live show is no exeption.
The ghost poet tour just started and is going really well- as soon as each show finishes, he makes a point of meeting people who came to the show- his fans really love him in a very personal way, I guess his music has that intimacy that makes you feel like you know him as soon as you have heard his album.

4) Describe the process that leads to the creation of your song.
I get scared of writing songs the same way, so what really excites me is when a song begins life as a melody that I find myself singing, or a rhythm that I make using chopsticks while I’m in a restaurant, and then grows in it’s own unexpected way.
I have a field-recorder I bring everywhere for capturing sounds around me, or ones in my head.

5) Returning to the live dimension, how do you describe it?
The live show is something that is very important to us.
We have a short film specially made for every track, and we have a VJartist called Ryan McClarnon who edits the videos live.
Last night we played in front of 300 people in a theatre, supporting Zola Jesus, it was an amazing atmosphere.
We want to play shows where you are in a cinema and also watching a band.

6) The album is scheduled for February 2012. How will it be?
The album is going to be a document of this past year, and all the ideas, experiences and arguments I have had along the way. It will also be a way of understanding what we do.
I would love it if the same thing you feel after listening to Ghostpoet’s album happens after you listen to ours: that feel you know us. There are so many field recordings and other sounds that are unique to the building we live and work in and our surroundings, as well as lyrics that describe what has happened to be since I have been writing this album, and how I have felt.

7) What are the plans for the near future?
We are looking forward to putting out the record and playing a few shows in Europe and the US.
Also we have been asked to create a film, but I can’t really say much more until production starts. Apart from that there are lots of videos, remixes and collaborations which I am very excited about.

8) We’ve finished. Greets the reader in your favourite language and suggest us a song.
I would like to suggest “Beside me” by Sun Glitters.
We were listening to it on the way to our last show- or at least I was playing it on a constant loop to my bandmates, so I think I may have ruined it for them!
It is an amazing track, and I think it deserves to be heard.