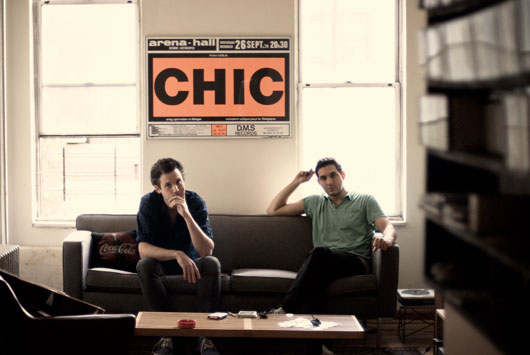 Where are you now Nick?
We are in London, eating curry and doing a whole bunch of interviews.

And how´s giving a whole bunch of interviews for you?
A lot of talking about myself!

You know, we imagine the life of the musicians like a sort of rollercoaster. You maybe stay stucked in a recording studio for months and then you have to fly around the world doing promotion and talking with a lot of complete strangers about things you don’t know, don´t rememember or maybe you don´t even have any interest in.
Well it´s not so bad but yes, it´s generally a life-style of extremes. If we are working on an album we tend to be very focused on being at home an working on it and then you go on tour and you are away a lot of time but most of the time we are doing exactelly what we want to do. We can´t complain.

Can you tell us something about the making of your last album “Dynamics”?
We started working on the record in summer of 2011, when we started it I guess we had a pretty clear idea of the sort of record that we wanted to make, and for our band that´s particularly exceptional, this compared with the first record for which we had no specific plan. We had a broader goal of making a records that was, for Alex more personal, lyrically, and from a music and production point of view, an album that dealt more in extremes, like if it was painted in broader strokes, which is sort of where the name of the record comes from, havin music that was more slightly more dynamic in terms of movements in emotions or volume, going from being very sparse and minimal to being a big sort of wall of sound. That took as a year and half working on and off to finish it, maybe compared to some bands it took us a lot of time but for us that´s working pretty fast.

One of your new tracks was produced by James Murphy. Not the first time that you worked with him in studio, right?
We actually met James when he produced our old band and then he helped us mixing our very first single “Hold On”. He helped us here listening the stuff we were working on, giving us pointers, but yeah “Teenagers In Heat” was the first time that we worked with him in the studio since “Hold On”, he sort of happened to be around, he liked it and then he came in the studio for a day and then it was pretty much finished.

How´s being part of DFA?
It´s great! From a creative point of view it´s very inspiring to be in such proximity to such a large group of other musicians who I really sincerelly admire so much, it´s really not because they are my friends but … you know, LCD Soundsystem was one of my favourite bands ever, the first Juan Mc Lean album, the Gavin and Delia album… DFA has made some of my favourite music ever. So knowing and being able to talk about music and bounce ideas back and forth with people you admire so much is great. From a business perspective, it´s pretty remarkable for a band, they let us pretty much do what we want. They give us unconditional support. That´s pretty rare. I really love those guys!

Do you feel some kind of responsibility?
Yeah for sure. We lernt an enourmous amount from James, from Tim, from Juan Mc Lean who are all people that spent time with us face to face, who quite letterally taught us how to use equipment, how to do different things so we feel indebted to them. So we want to do well for our own sake but also for their own sake.

I noticed that in the last couple of years DLSO had the chance to interview some cool artists and labels based just like you in Brooklyn, the label Let´s Play House for example. The music scene seems extremelly vital there. Like a sort of Berlin of the U.S.A.
What makes Berlin such an exciting place is the fact that artists can have there an affordable living, like NewYork 30-40 years ago when it was a cheap place to live.That gives the creative people the luxury to do whatever they want and that´s not quite the case in New York anymore. You have to work a little bit harder to succed and to make the ends meet, there´s so much going on in Brooklyn, it can be hard to stand out. When you look at the label you are saying, Let´s Play House, that label managed to make a name for themselves really just by working really hard and throwing great parties every week. The music as well but it´s also the result of bustin their ass.

Talking about clubs and stuff, is there any place that you particularly like in Brooklyn?
The thing about Brooklyn is that is growing and changing constantly, there´s always some new place. A place where I love to play is the Bovery Ballroom which is in Manhattan, a fun room to play but also where I been going to shows as a kid. New York can be the wrong city if you feel attachement to a place. All changes quickly.