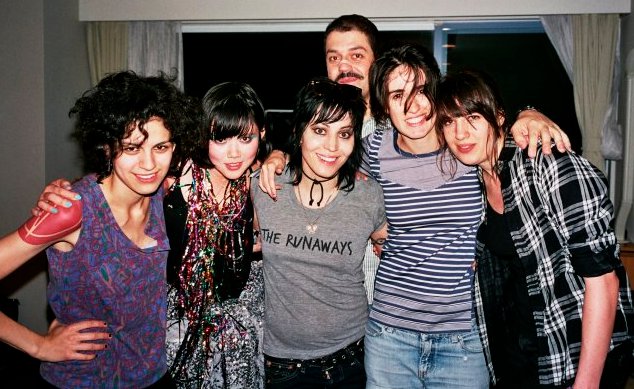 Another day, another interview. Today is the turn of Css. Read the chat between our Schizzo and Luiza Sá.

1) Hi! Introduce yourself to our followers

Hello, hi there! My name is Luiza Sá and I play guitar on the band CSS.

2) How did you think about this name for the band?

We just started the band and we’re thinking about names and emailing each other. I think we already had a show booked so we needed a name. One day Lovefoxxx saw some news on the web about Beyoncé saying she was “tired of being sexy” and thought it was hilarious for someone like her to say such thing. The name just stuck right there. Also when emailing, writing the whole name was long so we started writing CSS and that stuck as well.

3) To us, Brazil means samba. But talk to us about the brazilian music scene. Where is it headed?

This is a funny question that people always ask us. I actually have no clue where is headed just because Brazil is such a large musical country that it’s really hard to tell, I would have to be more active on the “scene” but I would say more about São Paulo but I think the whole music scene (in the whole world) is connecting and “heading” somewhere together. With the internet this exchanges are more intense than ever and I feel like the internet itself could be the scene. So if you know something somewhere, probably someone in another place of the earth knows it too.
The last things I’ve seen sound like they could come from anywhere, so there’s no real way to describe them as a very brazilian thing.

4) You are a large band (Arcade Fire are 8 and i really don’t get how they manage not the kill each other). Also, you are all women and only one man. How do you coexist? Is he the “peacemaker”?

Hahah! No. He’s also not the troublemaker. We’re all people. This is also something we get all the time. We are 5 and we’ve been together since 2003, it works like a family, like brothers, you just have that love and you’ve been trough a lot together so it transcends all this. But the boy girl thing was always much more of an issue from the outside than the other way around but Adriano always says it’s much better to tour with girls because they smell better. I agree. We have mostly men on the crew and even though I love them and love to work with them, I don’t like the smell of that side of the tour bus.

5) Right now, what project are you busy with?

Just finished a record, now we’re gonna tour all over and work on it (videos, promo, putting it out there). Just signed to a new label, it’s the beginning of the work with a new record. It comes out in August, first single comes out in May. Be aware.

6) You don’t have an actual web site, but a really funny blog you often update. How did you get this idea?

We just don’t dig and never visit other bands websites because the information they provide they can easily put on they’re myspace or facebook or some sort of platform so I guess we felt like a blog would be something that a fan (or us) would like to read, something much more alive and personal and not so much like the norm.

7) We have finished, greets the followers in your preferred language and suggest us a song.

ok!
GRAZIE MILLE! We are Css and we miss going Italy! Please have us over!

And I’m gonna sugest any song by Blonde Red Head, a band that has we really like.