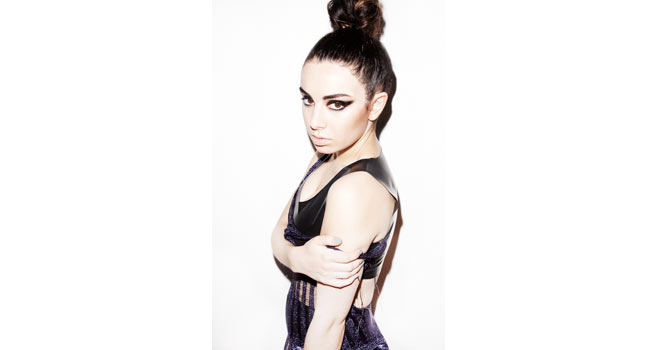 Hi Charli, how are you? What’s going on in your life at the moment?
I’m just finishing of my second record right now. And shooting a couple of videos for some songs… It’s cool.

Your story sounds a little bit like a fairytale: you started singing in your bedroom when you was 14 years old and you finally arrived to be a kind of pop star. Do you feel closer to the pop scene or the underground?
I feel really connected to both. I feel like the music I make is definitely pop music but the underground still gets it. Like, I also feel like I’m in this weird space where I’m writing big pop songs for big pop people, but at the same time I’m kinda just doing my thing too you know?

What would you have done without My Space? Did you have a plan B?
There wasn’t even really a plan A to be honest… I don’t think I really thought too much about MySpace until after I’d been using it for a while. It’s where I got my first shows and where I got into the club scene from and stuff. It was like my portal from my weird countryside life into London when I was 14.

How did you create the hit song I Love It for the Icona Pop? Did they come to you asking how to become more famous than Britney? Why didn’t you sing the song yourself?
Haha ummmm it wasn’t quite like that. I just wrote the song over a rough demo in a half an hour in my hotel room. It was a cool song but I knew I didn’t want it for myself. So it just kind of sat there for a while and then me and Patrik Berger heard that Icona pop needed a song and they liked I love it, so they just sang over my demo and added there own magic to it.. The rest is history.

Benga e Danny Brown are very different acts and you worked with both: so how do you select your collaborations?
I select my collaborators purely on what I like. If I like something, it makes sense to me. I only work on things I’m passionate about. Sometimes it’s confusing to people, but I don’t care. I do what makes me excited.

Your album True Romance has been produced by Gold Panda and Brooke Candy among the others, it’s again a really odd meltin’pot of names. I must imagine that your key of success is blending the opposites.
I guess, I mean my first record was mainly produced by Ariel Rechtshaid. But I select what I want. I piece everything together. My first record was inspired by this whole idea of the cut and paste culture that we live inside nowadays, so for me it made sense to have people like Brooke and people like Gold Panda on the same album. It just worked.

And what can you tell us about your DJing activity? Are you touring at the moment?
To be honest, I don’t dj loads- so this is kind of special. I was in Rome and Bologna a couple of weeks ago- but aside from that, that’s it. There will be full shows and full tours soon

Thanks, Charli. See you in Milan. Do you wanna spoliler anything of your set to the DLSO readers?
Haha no you’ll just have to wait and see… There’s gonna be some weird shit though, I promise…!!!